To begin this week, I am in the middle of an arduous term of prep school. Yes, you may call this old guy a preppy for a while.

It is probably not the kind of preparatory stint most people would like to flaunt, though. You switch temporarily to a bizarre diet and you do a lot of running.

The name of my academy is Colonoscopy Prep.

Okay, I know I have just made myself the butt of many jokes.

Way back in March 2000, TV personality Katie Couric made some people say "ewwww" and others "hooray" when she had her own colonoscopy done on live TV (the Today Show). Know what? She was motivated to go public by the tragic loss of her husband, Jay, at age 42 to colon cancer and Katie did a public service in calling attention to the life-saving potential of early detection.

It is worth noting that colorectal cancer is the second leading cause of cancer deaths in this country.

Think of all the chow-time fodder that we put through our digestive system during the course of a lifetime -- not all necessarily good for us, but most of it delicious. (I do not regret a single Carolina BBQ.) It only stands to reason that we'd want a specialist to check out the inner working of this amazing system God gave us, just as we have a qualified mechanic look under the hood of our car or truck to find problems before they happen. 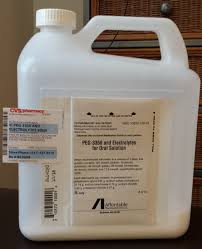 Generally, digestive specialists recommend colonoscopies at age 50 and every five years thereafter. One trouble source they can pinpoint is the growth of polyps or tumors within the wall of the intestine. The same special instrument that enables the doctor to view the colon wall makes it possible for him or her to collect tissue samples and remove small growths.

Tomorrow will be my third colonoscopy in the past 12 years. During my first one when we were living in the Northern Virginia/DC area, the doctor did remove some small polyps. During my second conducted here in South Carolina, there were no further growths. Of course, I am hoping for another good outcome in my follow-up. Who knows? Had not the doc snipped those growths during my initial procedure, I might have become a colorectal cancer statistic. (Bottom line update: I got an all-clear from my recent colonoscopy with my doctor pronouncing the results "perfect." He also said I was a graduate and should never have to have another colonoscopy routinely.)

Colonoscopy Prep is a world unto itself, and many patients say it is far more taxing than the actual colonoscopy. Because I have reached the most difficult stage before my graduation (and because I want all of you to feel sorry for me), I am going to tell you a bit about CP's curriculum -- and you can make your own bad jokes comparing it to Common Core.

Seven days before the procedure, I had to cut out fiber supplements, corn, nuts, popcorn, beans, and iron. None of that was much of a sacrifice, except for nuts. Obviously, the docs need to see your insides as cleaned out as possible so they can have a good look.

Day Two before the procedure (yesterday) I had to go on a soft diet with such items as coffee (yay!), Ensure shakes, Jell-O, pudding, custard, bouillon, applesauce, and creamy mashed potatoes. My helpful discovery as I searched for something filling was that Hungry Jack makes instant mashed potatoes that are actually tasty. My biggest challenge was going to the pizza birthday party for my granddaughter Hannah last night and having a bowl of applesauce while the rest of the family enjoyed some mighty fine-looking pizza. I did cheat and eat part of a slice of birthday cake later on -- I mean, you have to do that, right?

Okay, today is Day One, the day before, and discipline is really tight. The diet is now clear liquid only, and the menu features such items as black coffee (yay!), sodas, broth, water, white grape juice, and Jello/popsicles (but no red, blue, orange, or purple). I defy anyone to find something filling in that fare. The white grape juice is supposed to be a lifeline for diabetics who have to worry about blood sugar crashes.

Ah, but here is Colonoscopy Prep's final examination . This morning I had to mix up a humongous (4-liter) jug of polyethylene glycol (NuLYTELY), which now fills most of one shelf of the fridge. At suppertime, I have to drink one-half of the solution, one 8 ounce glass at a time -- and no sipping allowed, chug it down. Then between 3 a.m. and 5 a.m., I am to drink the second half.

Fill me up, empty me out. That's as graphic as I will get. You're welcome.