As Joaquin continued to strengthen to a Category 4 Hurricane, with sustained winds reaching 130 mph, forecast models were still all over the map, with some projecting a landfall in North Carolina, others in the Mid-Atlantic, still others in the northeast, and finally some having the big cyclone veer out to sea.

In the past few hours and to the relief of millions, consensus has grown that Hurricane Joaquin indeed will track east, stay out to sea, and not make landfall anywhere in the U.S. However, tempering that  good news is the likelihood that it will interact with other weather systems to pump in tons of moisture off the ocean and hit a large swath of the eastern USA with flooding rains, maybe of historic proportions in some places.

Be that as it may, let's not discount the possibility that Joaquin will defy forecasts and go in an unanticipated direction, and make landfall somewhere after all. Granted, the science of weather forecasting has improved over the years, but there is a whole history of hurricanes behaving erratically. 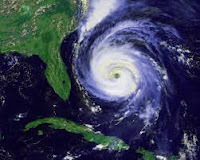 Two doozies in the 1960s were Donna and Doria. In the summer of 1960, Hurricane Donna got itself together in the Caribbean, then headed to the Florida Keys and to the Gulf of Mexico. From there, Donna made a second Florida landfall at Fort Myers before moving across the Florida Peninsula and out into the Atlantic. Then from the vicinity of Daytona Beach, Hurricane Donna went up the East Coast and made yet another landfall at Topsail in North Carolina. But it still wasn't done. Donna made it to New England and achieved one more landfall at Long Island. Whew!

Doria is not known for causing tremendous damage; however, it executed a remarkable turnabout in the Atlantic Ocean. After developing off Florida, moving up the coast and developing into a Category 1 hurricane, Doria apparently bade farewell to the U.S. by turning far out to sea. Then, amazingly, Doria did a loop-de-loop in mid-Atlantic and turned back westward toward the mainland. It finally came ashore near the Virginia/North Carolina border as a tropical storm.

In October 1954, Hazel became a phenom not just by being a Category 4 and coming ashore with a record 18-foot storm surge at Calabash, North Carolina, but then, amazingly, sustained much of its strength as it went inland -- all the way to Canada, where it brought bad flooding to Toronto.

Of course the sad story of Hurricane Katrina's devastating impact on the Gulf Coast in 2009 is well known, but for unforeseen and wide-ranging impact, don't forget Hurricane Ike in 2008. Ike made landfalls in Cuba and the Bahamas before hitting Galveston, Texas, then proceeded to the Midwest and Ohio Valley where it brought more death and destruction. As Hazel had done, Ike even still had enough clout when it reached Canada to bring down power lines and trees.

The point is that these monster storms seemingly have their own minds and frequently defy forecasts. And they do much damage far away from the coastline. That is why it is always best to keep a weather eye on them and stay prepared.