Can Dogs Sniff Out Hurricanes?

My Incredible Walking Dawg, Ellie Mae, has acted a little strangely on our walks the past few mornings. She has stoutly resisted making the turn home, even when we have gone a longer-than- usual distance. Ellie has tried to dig her paws in and insist on going farther and farther. She is not normally that stubborn.

Could it be that she sensed the hurricane ('Matthew") churning off the Florida and Georgia coasts and now starting to affect coastal Carolina tonight? Perhaps Ellie wanted to extend the walks because she sensed that the big storm would bring a wall of wind-driven water making dawgwalking problematic the next few days.

Yes, that is a stretch. However, the idea of animals sensing an ominous change in the natural world is not really far-fetched. On the day after Christmas 2004 when an earthquake off the coast of northern Sumatra was triggering a massive tsunami that would kill more than 150,000 people in 12 Asian nations, animals acted as though they had a whiff of impending disaster, well before humans understood. 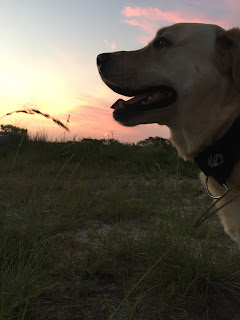 The Jan. 4, 2005 edition of National Geographic News reported it this way:

"Zoo animals rushed into their shelters and could not be enticed to come back out."

How to explain such behavior unless a sixth sense enabled the animals to know their world was seriously out of kilter? News reports stated that relatively few wild or domestic animals were found dead after the tsunami.

So maybe my Elliedawg felt something unusual stirring on these morning walks. I won't read too much into what she might have been trying to tell me. She seems to be peacefully settled in tonight as the heavy rains and winds of Hurricane Matthew start to affect us five miles inland from the Atlantic Ocean. We are expected here on the Grand Strand to have to deal with 8 to 12 inches of rain and wind gusts of 40 to 60 mph. Getting even just the basic-necessity dawgwalking done tomorrow will be a challenge.

Maybe Ellie will tell me when we have a safe walking break between tropical squalls.