Breaking news: Junkyard Dawg and I have made it to Labor Day after fighting through months of oppressive heat and humidity. That doesn't mean cool and crispy air has taken over yet. Our first walk of the holiday leaves me still sweaty as I labor over this computer; however, it is possible to detect the first signs of Nature mellowing-out with the approach of autumn.

Our big sighting today was a fairly long black snake near the woods line. It quickly slithered away when we walked upon (but not on) it -- just a few feet away! My best guess after consulting online guides to the multifarious snakes of South Carolina (no, not talking about politicians, that's another species) is that this guy was a black racer. Here is what the guide states:

One of the most commonly seen snakes in all regions of South Carolina, the black racer (Coluber constrictor) is a shiny, fast-moving snake with a white chin. Racers are noted for eating a diversity of smaller prey items, including smaller snakes, rodents, frogs, lizards and even small turtles. 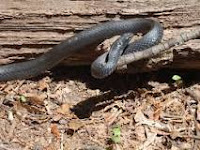 It was definitely fast-moving. I didn't get to examine its chin before it had raced away. Could be it was just a common black snake that does work we mostly applaud, such as eating rodents. Raiding birds' nests for the eggs -- no, we don't like that, but it part of Nature's way. When we were living in the leafy suburbs of Northern Virginia, I once observed an ultra-long black snake climbing the maple tree in our front yard. I suspected it was focused on a bird's nest; however, me climbing the tree and grabbing the snake and pulling it down would have been wildly impractical. Also, think twice before killing snakes like these that are beneficial. If a venomous one is a threat to your family, sure, do what you've got to do. Another option is to find a snake-chaser business that will relocate them for you.

Mainly what we dawgwalkers need to remember: Be careful not to step on a snake. That may well get you bitten. Others, snakes are not just lurking and looking to attack you. They will flee if not threatened. Fortunately, Junkyard Dawg was far less triggered by today's snake than she would have been by a squirrel or a German Shepherd. (She yearns for a cage match to the death with a German Shepherd.)

Our other main outdoorsy observation from summer survival walks was the proliferation during August of small-ish birds at dusk that swooped and dived -- sometimes within feet of us  -- in apparent quest of insects. A fellow newspaper reader advised me that these were Barn Swallows just migrating through, with Tree Swallows soon to follow. That explanation seems plausible. It is amazing how much energy these little creatures have -- not as much as Hummingbirds, to be sure, but still a whole lot.

It feels great to be back to energized walks in September. I was thrown off balance and slowed a bit by some dental surgery that was tougher than I expected. Looking forward to resuming trainer Sarah Parker's wonderful core fitness class for seniors this Wednesday, and am even working out some on my own in preparation. Okay, the diet hasn't been healthy the past few days, but will aim for a well-rounded Labor Day feast with family later today -- quality protein, and plenty of fresh fruit and veggies.