Walkin' Against the Wind

It was a solid day indoors but kind of an unsteady one outdoors. On our afternoon walk, Elliedawg and I battled wrap-around, leftover winds from a massive winter storm. Gusts of upwards of 50 mph made me wonder how large a snapped tree limb it would take to knock you out cold, or worse. The weather people said the "real-free" temp was 47F; however, walking against a gale lowers that to sub-freezing.

As almost always happens on a dawgwalk, though, we found notes of cheer. We saw flocks of Robins, in my book a much surer harbinger of Spring than a groundhog pulled out of its burrow in Pennsylvania. We walked in a wooded section behind the community swimming pool and found it gave some welcome protection from the winds. The fountains of water were going full blast in the pool, thereby creating pleasant visions of outdoor aqua therapy only a few months from now.

As for indoors, I felt some sense of accomplishment in wrapping up the next to last week of cardiac rehabilitation at Grand Strand hospital, Friday being the 33rd of 36 scheduled sessions. I will graduate on Valentine's Day. I need to think of some little heart-felt token of appreciation for the wonderful nurses there. Maybe candy, even though that wouldn't jive with the nutritional guidelines we received when we took instructional breaks from exercise.  Maybe a basket of fruit, or an edible arrangement? 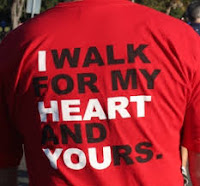 Thinking ahead, I called the Core Fitness Club to see what I would need to do to take out a membership again so I can resume the senior core fitness class there on the Monday after rehab ends. I have not been able to go to that wonderful class since last Spring when the cardiologists and surgeons diagnosed me as having a dangerous aortic aneurysm -- now blessedly a thing of the past. To my surprise, the club still has me in its fold. I just need to tell the front desk to reactivate my key fob.

It is nice, very nice, to be remembered!